History of the Château

The Château de Villers-Bocage
in the Middle Ages

Around one kilometre south from the village, right next to the current A84, the Lords of Villers owned a motte-and-bailey castle in which there were several residential buildings. During the Hundred Years’ War in the 14th century, Jeanne de Villers heiress of the Villers estate, married Roger Bacon, Lord of Molay Littry. They had a daughter, also called Jeanne, who would become the sole heiress of the estate in the family. She was very popular and married twice, but she died childless. During her life she made numerous donations to religious establishments and founded the Hôtel Dieu de Villers-Bocage in 1366, also known as the Hospitaller Priory of Saint Elisabeth, which accommodated the poor and sick, and pregnant women. 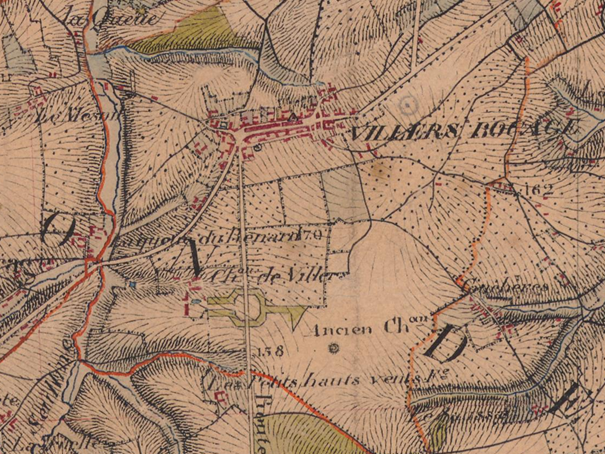 After the Hundred Years’ War many families held the lordship of Villers-Bocage: the Goyons in the 15th century, the Roncherolles in the 16th century. 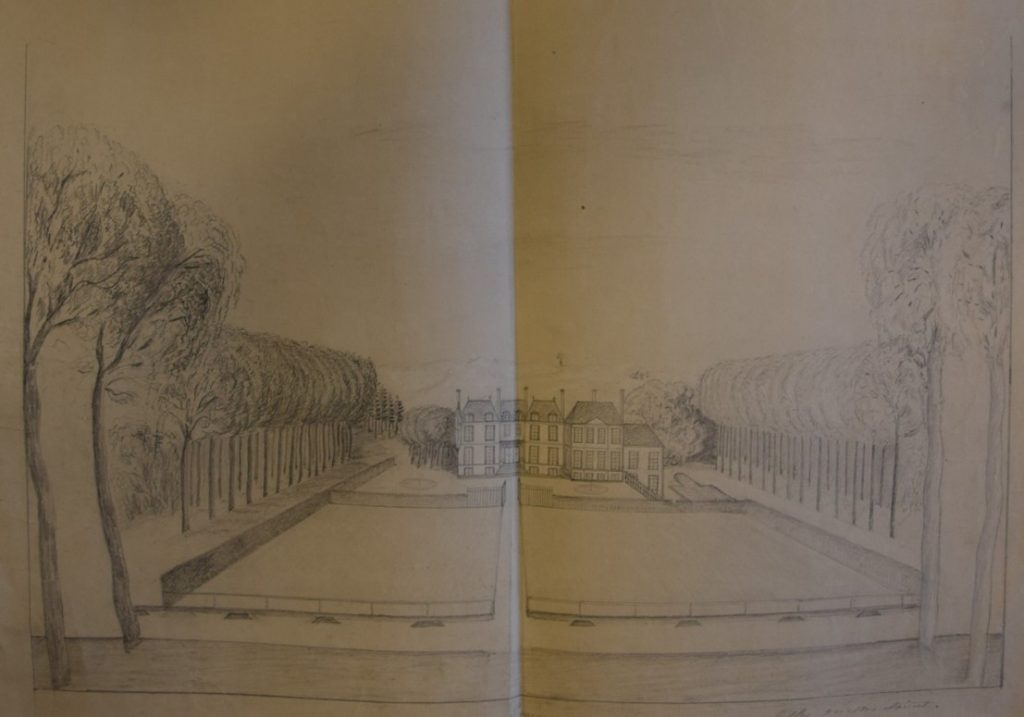 Land terrier of the parish and lordship of Villers-Bocage belonging to the Count of Blangy, surveyed by Delahaye, 1769 (St Malo Archives) 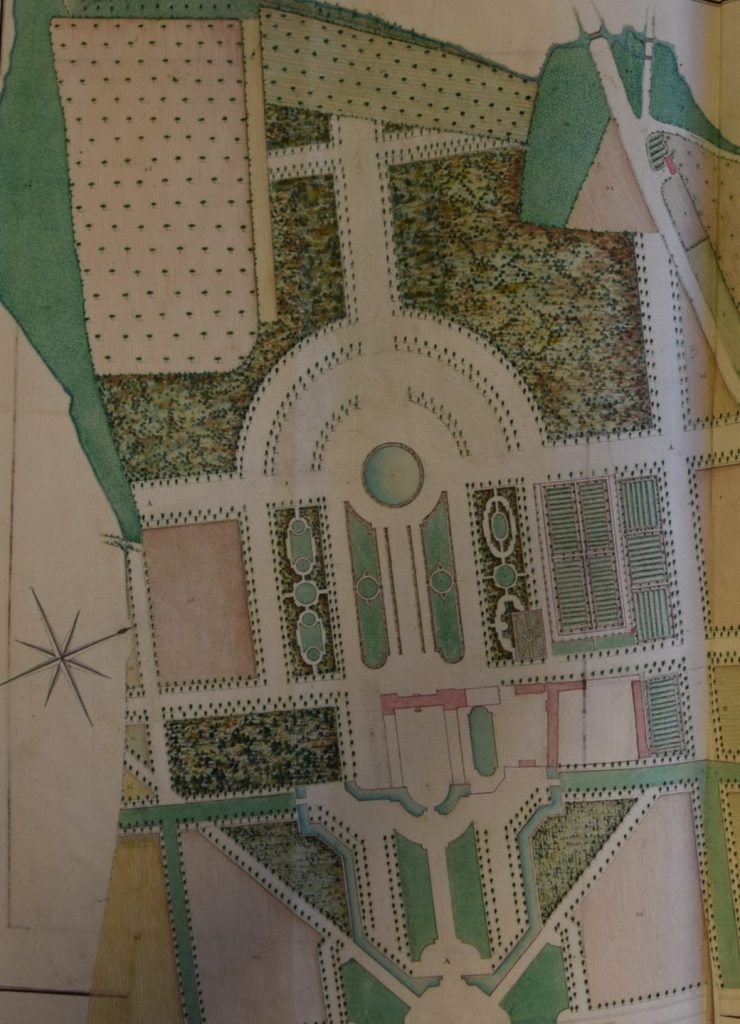 The Garden of André Le Nôtre

The Château de Villers-Bocage was built in 1637 when the Morin family combined the territorial parishes of Saint-Martin and Saint-Germain de Villers.

In the 18th century, the château passed into the hands of the Le Vicomte family. Pierre François Le VICONTE de BLANGY, Baron of Blangy, Lord and Master of Villers-Bocage, Maisoncelles-Pelvey, Banville, Berville, Teillement and Fontaine-Etoupefour. He was also owner of the private Blangy mansion in Caen. Upon his death, his successor was Pierre Constantin Le Vicomte, Lord of Blangy le Château and of Villers; marshal of the king’s camp and armies, commander in Middle Normandy. Born in Caen on the 26th of April 1722. He added a wing to the château in 1766 but the project of a second symmetrical wing never came to pass because of the French Revolution. He saved his life by emigrating to England and selling the château to Pierre Jacques Meslé de Grandclos in 1792.

On the 2nd of June 1777, Joseph II, Archduke of Austria and future Holy Roman Emperor, brother to Marie-Antoinette, made a stop at Villers-Bocage when he visited France.

He travelled undercover under the pseudonym of Count Falkenstein. It was due to the unexpected affection of the people of Caen that he chose the Château de Villers-Bocage to spend a peaceful night. We will leave you to discover what happened through the words of a chronicle of the time :

« On the 2nd of June 1777, Emperor Joseph II was travelling to Caen, at around half past six in the evening. He passed in front of the barracks, Saint-Jean Street and Notre-Dame, and then took the road to Villers where he slept. Although he was expected, he was not recognised until he reached the Saint-Pierre crossroads where people were crying out “long live the emperor”.’ Du Coudray believes that the welcoming preparations would have discouraged Joseph II: ‘Upon entering Caen, the prince realised that many preparations were in place to receive him: the inconvenient enthusiasm of the inhabitants of this village made him pass through to another one. »

This is a sketch for an unfinished portrait of Emperor Joseph II (1741-1790). He was German-Roman Emperor from 1765 to 1790 and sovereign over the Habsbourg lands from 1780 to 1790. The elder son of Empress Marie-Thérèse and her husband, François I, Joseph II was the first Emperor of the Habsbourg-Lothringen house. He is decorated by the red and white sash of a Knight’s Grand Cross of the Order of Maria Theresa (the highest military order of the Empire). He is standing in a splendid interior, with a view through an open window, a golden throne on the left and a sculpture by Ares Ludovisi (Dieu Mars) behind him. This statue is kept in the National Roman Museum, which indicates that the painting was made in Rome.

At the château you can admire the room where he slept and a copy of this portrait.

He bought the Château de Villers-Bocage, as well as the outbuildings, 12 farms, 90 hectares of woods and 320 hectares of meadows, from the Count of Blancy on the 9th of February 1792, for 1 million pounds, and the furniture for 47 thousand pounds.

Born on the 4th of March 1728 in Saint-Malo, son and grandson of shipowners. Pierre Jacques became a ship ensign at age 13, and then ship captain at age 24. He notably worked for René Auguste de Chateaubriand, the father of the writer. He was called Pierre Jacques Meslé, Lord of Grandclos but made people call him Meslé de Grandclos. He married Pauline Le Bonhomme, daughter of Jean Baptiste Le Bonhomme, great shipowner, on the 20th of February 1753. He became a shipowner at age 28. On the 2nd of February 1783, Louis XVI signed the order appointing Meslé de Grandclos as shipowner of an expedition of four ships to China. He was made a noble with the title of squire by the king in 1768. The law of 27th March 1793 criminalised aristocrats and enemies of the Revolution. He obtained a certificate of civic engagement on the 2nd of April. The law of the 21st of March 1793 instituted, in each community, a surveillance committee. This had the power to compile a list of people under suspicion and to issue arrest warrants against them. Furthermore, the committee issued the documents, called “civic engagement certificates” to people who favoured the new regime. Other than not being worried by the authorities, this document enabled free movement and significantly, permission to enter Paris.

His son Stanislas was wanted by the authorities but he was able to flee to Hambourg and then to London.

Pierre Jacques became City Arms Commissioner for the city. Many canons were taken from the ships and installed around the city to protect it from the Vendéens. They finally attacked Granville.

On the 9th of December 1793, by order of the General Security Committee, he was stopped and put under house arrest by two guards. He managed to escape, or the jailors allowed him to leave. He left for St Domingue. During his absence he lost his money and belongings. The commissioners took advantage of his absence by taking a visit to the Château de Villers-Bocage, in order to finish their collection of money and jewels. In 1795, he made the most of his appeasement by returning to France and he was crossed off the list of emigrants. He managed to find his real estate, most notably the Villers-Bocage property. He died at Villers-Bocage on the 30th of January 1806.

He became Mayor of Villers-Bocage in 1810 and remained there until 1830.

Through patent letters from the 11th of December 1815, he obtained the title of hereditary baron. Removed in 1790, the titles were gradually reintroduced by Napoléon I. The coat of arms was reintroduced from 1808 in favour of the title beneficiaries. The knighthood and confirmation of nobility were not reintroduced until 1814, under the Restoration.

Son of the above, he was born on the 27th of March 1836 at Villers. He was paymaster general in several French districts. The paymaster general of the district consisted of the head of the region who received the title of regional paymaster general. He acted as treasurer, accountant, inspector, economic and financial adviser and manager. He was a type of local banker for the state and the local authorities.

The role of the paymaster general was one of the most lucrative in high civil service.

He died on the 29th of February 1888 at Saint Lo. The three generations are buried in the Villers-Bocage cemetery, but Pierre Jacques’s grave was destroyed by a bomb in June 1944.

His death led to the sale of the château because of the expensive mortgages that he had taken out for his personal expenditure.

After the death of the Baron de Grandclos, the château was put up for sale. This document showing the sale of the château offers us a privileged insight into the property, its riches and substantial gardens. The study by M. Caquenée, solicitor at Villers-Bocage, confirms that the château was bought by MANSART and the French-style park was designed by LE NÖTRE. 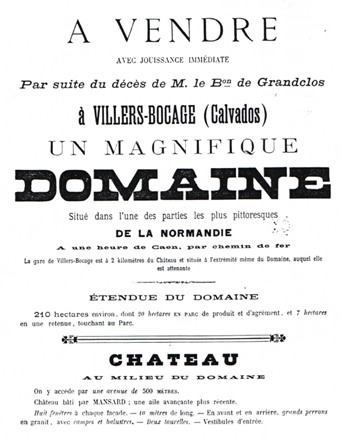 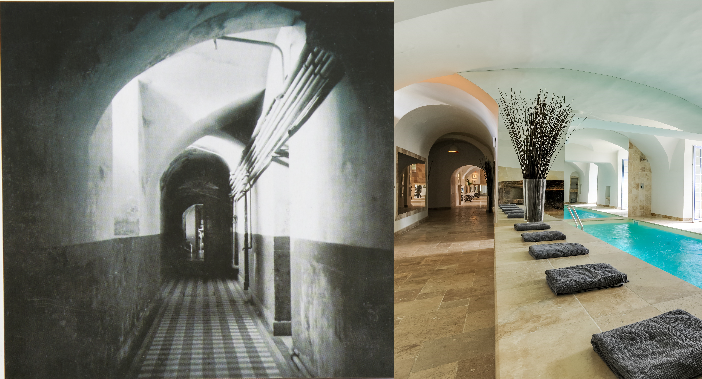 The basement corridor in 1944 up to today now serves as a place of refuge for the entire population of Villers from the 13th of June for two months during the bombings.

The kitchen on the same level served 3000 meals to refugees. 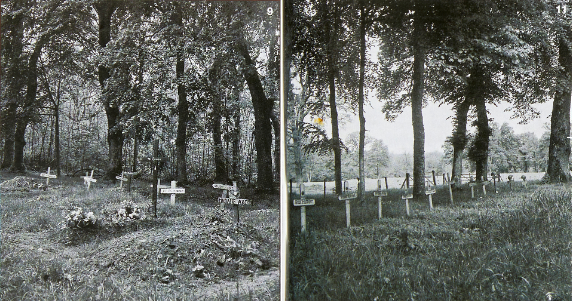 In the park were graves from the French and German cemeteries.

There was also a new-born in the château nursery during this period. What was the operating room is now the cinema.

Amédée and Albertine de Clermont-Tonnerre bought the château in 1930. Amédée was born on the 10th of February 1898 in the 7th arondissement in Paris at 60 Boulevard de la Tour Maubourg. In 1914 he enlisted as a volunteer and became an orderly of Marshal Foch. Awarded the War Cross 14-18. He married Albertine, Countess of Merode and the Holy Roman Empire, on the 28th of June 1922.

On the 30th of June 1944, at the end of the afternoon, 250 British bombers dropped 1100 tons of bombs. According to Captain Boyers, the first pilot to bomb the commune, the resistance requested the bombardment to reduce the armoured division sheltering in the city. It assumed that the inhabitants were safely sheltered in the château. The goal was to render the crossroads impassable and to avoid the arrival of reinforcements to the west of Caen. From then on, the château became a proper hospital.

Madame Clermont-Tonnerre, helped by Doctor Dary and his wife (nurse), Miss Marie (pharmacy assistant) the Sisters from the hospice and dispensary and the Red Cross first-aiders who looked after the wounded.

On the 7th of July, the Germans ordered the evacuation of the area going from Dampierre to Mondrainville. The refugees had to reach south of the Saint Sever-Vire-Falaise line. The orders were strict: the evacuation must be finished by the 9th of July at midnight, under pain of death. Madame Clermont-Tonnerre found it difficult to carry out this order with 200 people living in the château. She therefore decided to ask the German general in charge of the region to authorise her request to leave open the sanitary area of the château. On the 9th she received the notice that her request had been accepted but that she must evacuate the elderly, small children and the lightly injured, which was around a hundred people. The peace zone protected by the red crosses on the roof could still carry out its role.  On the 25th of July, the Germans, sensing the Allies were on their way, wanted to take back the basement rooms to install a first-aid area. Therefore, the elderly and the able-bodied left and the rooms were evacuated. 148 people, of which a third were ill, stayed in the château.

The Germans left on the 4th of August at 1am. The Allies arrived in the afternoon.

When the war ended, it became a maternity ward and witnessed the birth of 450 children.

On the 20th of July 1944, shrapnel hit the south side of the Château de Villers-Bocage and killed three people. The impact of it is still visible now. 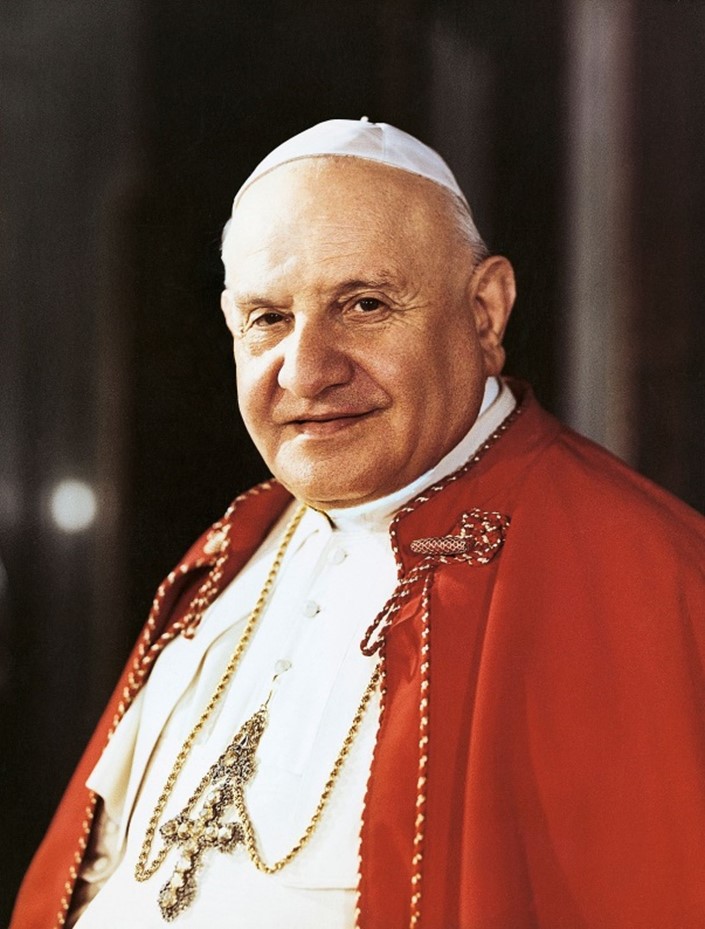 Pope Jean XXIII, canonised in 2014. In 1950 the Apostolic Nuncio and future Pope stayed in the château for a week to visit the area undergoing restoration and to bless the new churches. 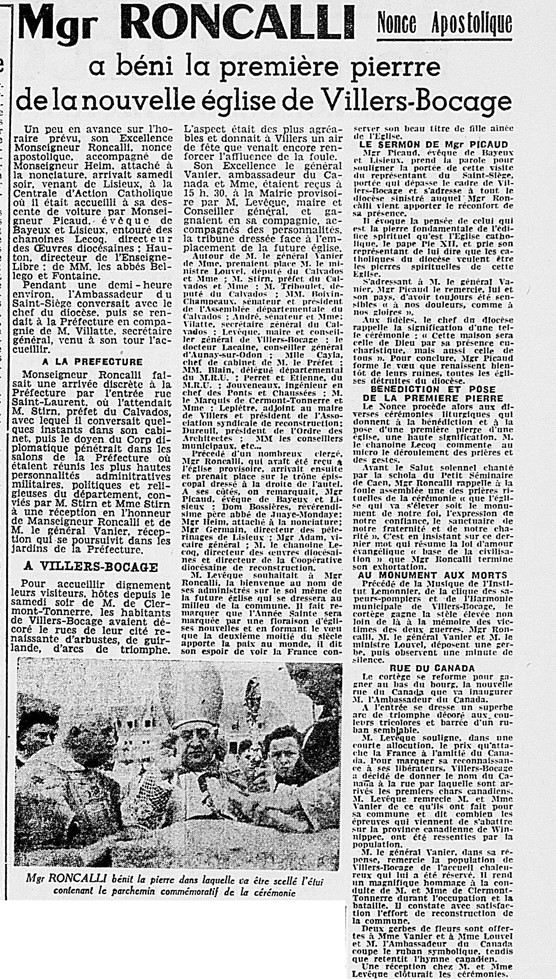 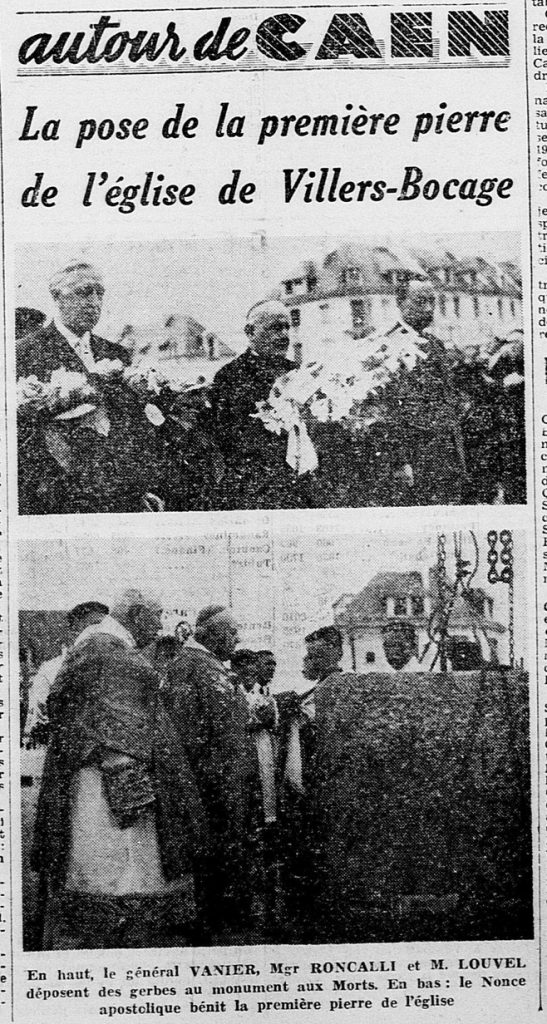 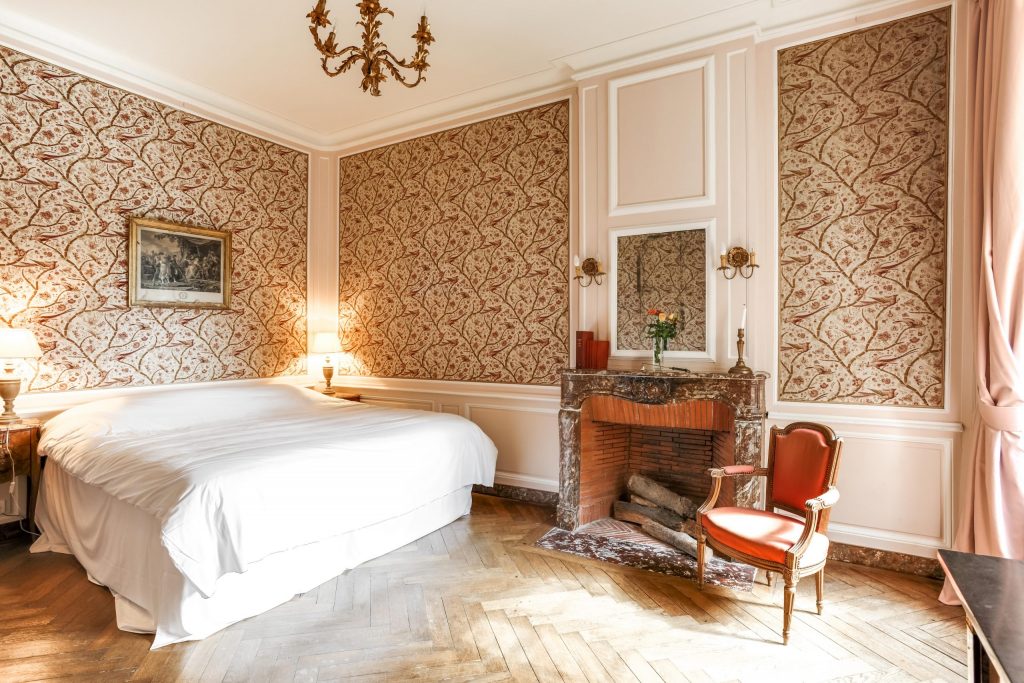 In 1950, the Apostolic Nuncio and future Pope Jean XXIII, canonised in 2014, stayed in the château for a week to visit the area undergoing restoration and to bless the new churches. He was invited by the Marquis of Clermont Tonnerre to eat and sleep at the château. Today, the suite where he stayed in the château is named after him.